A History of Protest Product Placements

The recent pro-Trump "Jericho March" in Washington was derided in some circles for its advertising of MyPillow, complete with a promo code being given out during the event.  However, product placements have a tendency to crop up at key moments throughout history, starting with what might be called the original Jericho March:

Rahab: "Now therefore, I beg you, swear to me by the Lord, since I have shown you kindness, that you also will show kindness to my father’s house, and give me a true token, and spare my father, my mother, my brothers, my sisters, and all that they have, and deliver our lives from death.”

Israelite spies: “Our lives for yours, if none of you tell this business of ours. And it shall be, when the Lord has given us the land, that we will deal kindly and truly with you, especially our friends at Jordan Valley Community College.  Whether you're looking to take the next step in your career, enter an exciting new field like goat herding or frankincense trading, or narrowly escaping Divine wrath being poured out on your city, JVCC offers the degrees you need to get ahead in the fast-paced fourteenth century B.C.  Lord knows the market for prostitutes in Canaan has been booming recently (literally, the Lord knows that; that's why we're here), but you never know..."

St. Paul: "I was brought before you by the prompting of the Holy Spirit- and by the good folks at Rufus Punctilius Lugubrius travel agency.  Whether you're looking to experience the bustling city life of Corinth or Antioch, or for a quiet escape to the beaches of Illyria or Crete, leave your next vacation, business trip, or missionary journey to RPL.  They don't fiddle around..."

St. Paul: "Should I not have mentioned fiddling?"

Patrick Henry: "Give me liberty, or give me death!  But you're still free to choose deals to die for at McClanahan's, Virginia's first name in pewter since 1717- now offering fifty percent off all flagons, porringers, and tankards!  Conveniently located in Alexandria, Richmond, Williamsburg, and now Yorktown!  Present a scrap of parchment with the code PATRICK for special buy-two-get-two-free deals on candlesticks and access to my signature line of teapots."

"Mr. Gorbachev, tear down this wall and replace it with a stylish patio from Von Jaegermeister Home Landscaping.  You might think such features as a gazebo, a koi pond, or a Zen garden are outside your price range, but with Von Jaegermeister, becoming the talk of your neighborhood or geopolitical bloc is closer than you think.  Schedule your free consultation today, and don't forget to use code EVILEMPIRE for ten percent off all seeding purchases!"

Posted by Jeff Ditzler at 7:19 PM No comments:

What Really Happened in the Electoral College, II

In a previous post, I analyzed the reasons behind the wide divergence between the Electoral College and national popular vote in 2016, finding that although the Electoral College had a slight bias in favor of Obama in 2012, Trump was able to improve his margins in the crucial Great Lakes states while Hillary Clinton's improvements mostly came in California and Texas, neither of which switched any electoral votes. A further comparison of the 2012 and 2016 elections, and the shifts in the states between them, sheds light on the real function of the Electoral College in our republic. 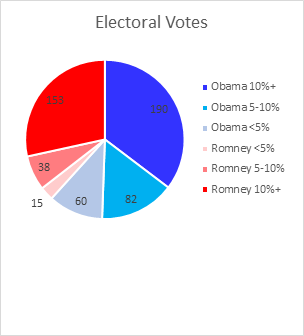 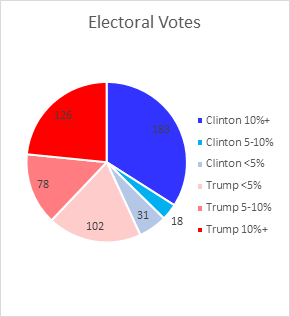 Donald Trump's narrow victories in the crucial states for 2016 allowed him to benefit from the Electoral College, but they pose the risk of a humiliating defeat this year. Because so many red states, particularly large ones, were close in 2016, a swing of a few percent of the vote to Joe Biden could dramatically reduce Trump's Electoral College tally, particularly if Biden can poach states like Ohio, Georgia, or Texas. If the most pessimistic polls for Trump are right, he could have the lowest number of electoral votes for any Republican since 1964 (currently, that is Bob Dole's loss with 159 electoral votes in 1996).

These examples show the true nature of the Electoral College. Compared to the popular vote, it punishes running up large vote totals in a few states and rewards building a coalition that can win a majority, or at least a plurality, in many states. In 2016, this meant that Donald Trump’s ability to win over the Rust Belt counted for more than Hillary Clinton’s supermajority in California, but there is no guarantee that it will not favor the Democrats in future elections, as it did as recently as 2012. Whether or not Americans support replacing the Electoral College with the national popular vote, they need to understand its true effect on our elections.

Posted by Jeff Ditzler at 6:30 PM No comments:

What Really Happened in the Electoral College, I

After occurring only four times, three of them in the nineteenth century, it happened again. For decades, the possibility that the winner of the popular vote for President might lose the Electoral College was seen as a quirk of the American electoral system or a historical curiosity. Now, for the second time in less than twenty years, it was a reality.

In red states, Mitt Romney was an impressive vote-getter, winning by wide margins in several states that had come close to voting for President Barack Obama in 2008. He flipped Florida and Ohio, as well as three traditionally Republican states- Indiana, Virginia, and North Carolina- whose diversifying electorates gave them to Obama four years ago. Yet a string of smaller battleground states- Colorado, Iowa, New Hampshire, Nevada, and Wisconsin- as well as Pennsylvania, where the Romney campaign eschewed a serious effort until the last few weeks of the campaign, held for President Obama by margins of a few thousand votes each, giving the incumbent a 272-266 victory in the Electoral College even as Mitt Romney won the popular vote by roughly 800,000 votes.

In 2012, The Electoral College Favored Obama

Quantifying Trump’s Performance in the States

So, how did the Electoral College go from a slight bias toward the Democratic candidate to an even wider one for the Republican?

Donald Trump improved on Mitt Romney’s national popular vote total by about 3.3 percent, from just under 61 million to just under 63 million. Hillary Clinton received about 62,000 fewer votes, or 0.1 percent, than Barack Obama did in 2012. Minor party and write-in votes surged from 2.4 million in 2012 to 8.3 million in 2016, for an overall increase in voter turnout of about six percent nationwide.

If these effects were evenly distributed across the country- if Donald Trump had gained on Mitt Romney by 3.3% in every state, and Hillary Clinton had dropped off by 0.1% in every state- Clinton’s popular vote plurality would carry every Obama state from 2012 except Florida, enough for her to win.  The map and chart below compare the actual results to that theoretical result. 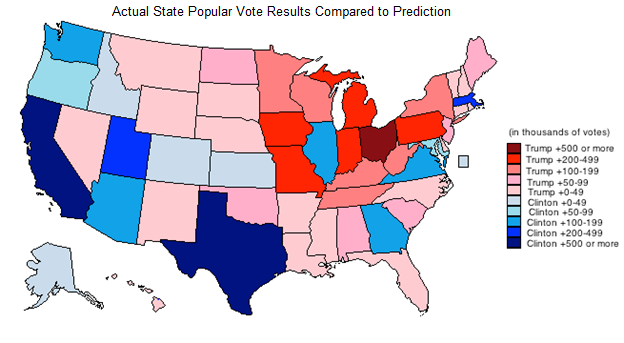 Among the other states where Hillary Clinton overperformed by between 100,000 and 500,000 votes, only Virginia was a battleground in 2012. Three of the others (Arizona, Georgia, and Utah) were states that are moving toward the Democrats, but not by enough for Clinton to carry them in 2016, the remaining three (Illinois, Massachusetts, and Washington) were safe Democratic states where she ran up the margins. Donald Trump, by contrast, had the good fortune to overperform where he most needed to: a group of states roughly bordered by the Mississippi Valley, the Great Lakes, and the Appalachians. He overperformed by between 100,000 and 500,000 votes in eleven states, and among those states, only New York was out of reach for Republicans. Five other states (Indiana, Kentucky, Missouri, Tennessee, and West Virginia) were already securely Republican. The other five included the four Rust Belt states, in addition to Ohio, to switch from Obama to Trump (Iowa, Michigan, Pennsylvania, and Wisconsin) and Minnesota, where Donald Trump came within 45,000 votes of being the first Republican to carry the state since Richard Nixon’s 1972 landslide.

Posted by Jeff Ditzler at 6:07 PM No comments:

All posts on here are my own opinion and not my employer's.